[Continued from the previous article]

There were a few homes in the northeast corner of Carrying Place Township that were part of what was known as the “Bowtown” neighborhood. The homes were eventually built on lots #17, #18, and #24A, as drawn on the Coburn survey of Carrying Place (T1R3WKR) in 1820. Two of those lots, and lot #19, were sold to Samuel Fling.

Three lots sold to Samuel Fling by John Black, Agent for the Estate of William Bingham (Maine Archives, Coburn’s 1820 Survey of T1R3W, annotated by the author)

Lots #18, #19 and #24A were purchased by Samuel Fling of New Portland in 1825, and he reportedly lived there briefly. Fling’s wife was Abigail McFadden, daughter of Thomas and Hannah (Savage) McFadden, who moved to Embden from the Georgetown area. There was periodic strife in Samuel’s marriage, and the couple separated eventually. As early as 1818, Samuel posted a notice in the local paper announcing that he would no longer be responsible for his wife’s expenses, as she had “behaved in an unbecoming manner” and left his board and protection. Her husband wasn’t the only one who thought Abigail was difficult, as the following correspondence will show.

Samuel Fling died in 1840, and in April 1841, Joseph Spaulding Jr. owner of the hotel at Caratunk,* wrote a letter to John Black, Bingham’s Agent, making an unusual request.

“I would inquire of you, if it would be proper for you to take back the Deeds, which you once gave to Samuel Fling, and give a Deed to me. Said Fling has deeded to me the same land but his wife would not sign the Deeds, and is likely to be troublesome, the Deeds which you gave were deposited with me when he first received them and since, and are not recorded. If you will do it, I will enclose to you the deed which you gave to Mr. Fling and also you may see that he intends for me to have the land, and I will pay you for all your trouble &c…there is no person but myself that knows that Mr. Fling ever had a Deed of you.”

Abigail Fling inquired about the deeds in May 1841, as described in a letter from William Allen, a local agent for the Bingham Estate. Allen wrote to John Black:

“I am requested by Mrs Fling widow of Samuel Fling dec’d to obtain from you some evidence of the title you gave him to a lot of land where he formerly lived in No 1. 3rd Range west of the river. She states that about twenty years ago Mr. Fling paid you for the lot and you gave him an obligation to send him a deed as soon as the Agents were fully authorized to do it. That some time afterwards she has been told that you deliv’d him a deed in presence of Eben Hunnewell; The deed cannot be found or any record thereof.

If you gave him a deed she wishes you to send her a copy of it from your record; if not she wishes you to give her all the information you can about the contract. Please direct to “Abigail Fling West Embden” ~ There was some difficulty between her and her husband in his life time and they parted; when he died all his estate & effects were left in the hands of Joseph Spaulding with a quitclaim deed of the land. The object of her enquiry is to obtain her dower.”

No record has been found to determine whether Abigail was able to recover her dower. There are two deeds in the Somerset County Registry that relate to this issue. One was recorded in 1830, with an execution date of 1826, conveying the lots to Joseph Spaulding from Samuel Fling—Abigail did not sign. And in 1841, there is a deed of the same properties to Joseph Spaulding, from the Bingham Estate Trustees. In 1830, Joseph Spaulding had quitclaimed this property to his uncle, Dr. Jonah Spaulding; Joseph bought it back in 1831. It seems that John Black was satisfied that Fling wanted Spaulding to have the property, and issued an Estate deed to solidify Spaulding’s ownership.

Abigail Fling left Maine and lived in Wisconsin with her daughter Emily Fling Crocker’s family. Another of Abigail’s daughters, Hannah, married Nathan Marsh, Jr. of Anson, and they also moved to Wisconsin. Abigail died in 1863, and is buried in Wautoma, Wisconsin. Samuel Fling’s grave is in the Webster Cemetery at Caratunk.

Samuel Fling’s lots were subsequently divided and sold over time to various families whose names appear in the 1860 and 1883 maps of Somerset County. The next article will cover the period to 1860, with owners shown on the Chase Map of Somerset County: N. Pierce (on lot #17), A. Sanborn, and E. Collins [Thomas Brown, in Bowtown Township, was discussed in an earlier article]. 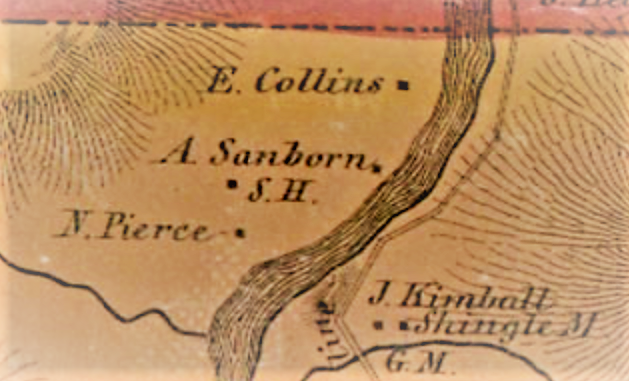